With emotion, BAC Technology for Riders & Horses is pleased to share with the public an important, truly unexpected medical result.

In collaboration with the Equine Clinic San Biagio (Dott. Ugo Carrozzo & Partners) of San Biagio di Argenta (FE) the story of the foal Ferdinando is first of all a story of struggle for life, at any cost: even where every possibility it seemed to have to be definitively placed, patience, competence and teamwork have led to truly unexpected results, of which BAC Technology is truly proud.

To fully understand what can be called a miracle, we must start from the origins.
“Ferdinando is born almost two months in advance and foals normally do not survive when they are born so early“, says Dr. Aida Guazzieri, at the forefront of fighting for the life of this foal, together with Dr. Matteo Toniato and Dr. Valentina Balandi. Aida herself gave the name Ferdinando to the horse, owned by the San Biagio Clinic itself (Dr. Ugo Carrozzo and Roberta Pirazzoli). “It was already a miracle that the animal was born alive because, properly, the birth was actually an abortion, not a delivery. Being born so premature the horse immediately went through a thousand problems. Its survival is due solely and exclusively thanks to the experience and skill in the perinatology of Dr. Tania Turci, together with Dr. Giovanni Zavaglia, who practically were the incubator, because Ferdinando was hypoxemic and did not yet have such a degree of maturation to allow him to stand up. So the foal was in neonatal intensive care for 4 weeks. But bad luck sees us very well, and in a short time Ferdinando has gone through a series of further complications: it underwent an operation for septic arthritis of the right hock, it was treated for an entropion of the left eye with corneal ulcer and, not least the serious complications  Urachus patent and Uroperitoneum, who again exposed the foal to the risk of not making it. We had to separate him from the mother because the mare thought it was dead with the trampling risk. Having escaped death for the second time, we were able to gradually eliminate the problem of septic arthritis and get it back on its feet. Its first time in the paddock was 20 05 2018 (the foal was born on 18 03 2018). Then, again, at the end of September … A further complication generates in Ferdinando the contracture of the anterior flexors with flexion of the left carpus. This condition can normally be treated in mild forms with surgery but it is an invasive treatment that reduces the success rates in sport. In Ferdinando’s case it would have been useless anyway because it would not have been decisive in the front left. Therefore, we opted to try medical therapy “.

The video you see below shows just all the difficult steps crossed at the Clinic San Biagio – with the precious collaboration of the veterinary assistant/animal osteopathy expert Evelina Ravaglia – to try to put Ferdinando back on its feet when, once again, putting him down seemed to be the only solution. 16 October, Ferdinando has a plaster cast put on (double bandage + 2 vetcasts) to both front legs. The plaster casts are changed every 4-5 days, until 3 November. Starting from this moment, the collaboration with BAC Technology  has proved to be fundamental; once the delicate and complex situation was understood, the company made available a special handpiece (made to measure for the foal, see photo) which allowed treatments to be carried out with the two BAC devices, EqUltrasound (+info: click here) and Vega. , respectively with ultrasound and radiofrequency.

The results were exceptional, also in terms of time: judge for yourself (at the bottom of the video you will find the details of the treatments carried out).

Beginning of EQ Ultrasound treatment (grey flat transducer 15 min at 30% and small convex 5 min 20/30%) for both front ones every 4 days at each change of plaster cast until 13th November; start of therapy with VEGA (plate + electrode 20/25% for 15 min on the whole leg) and EQ Ultrasound (5-7 minutes of trigger) alternate days to both. On November 15th the plaster cast is removed and the treatment is finished on the right front. From December 15th we did two treatments a week with Vega at the front left only. January 3 is the last treatment. The plaster cast is finally removed followed by the application of a double bandage with a round of brushed cotton and a front prosthesis made with a moulded vetcast. At the end of the month, the colt will finally be able to run again. What the future will hold for Ferdinando? It is the colt and will be the horse of the San Biagio Clinic. It will also be, forever, one of the testimonials, undoubtedly the most valuable, of the BAC Technology company.

On the cover, Ferdinando in a particular photo: Dr. Guazzieri tells us that when it was taken she did not know yet “if the colt ever would have stood up, but it was smiling … like telling me not to worry that it would make it”. 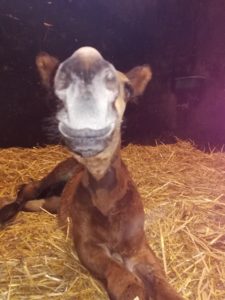